More than half the voter registrations turned in by ACORN canvassers during the last election were not valid, according to testimony to be presented before a House Judiciary subcommittee.

The testimony is from Anita MonCrief, a former employee of an affiliate of the Association of Community Organizations. MonCrief, who was fired… Continue

Obama the Resident Puppet for the Soros Group; Links Included..

Have any doubts about the kinds of people pulling "The Puppet Residents" strings?

"George Soros: Peripheral care should be the central concern"
http://pulse.alacra.com/analyst-comments/Soros_Fund_Management_LLC-C1064945

The chairman of Soros Fund Management explains how Special Drawing Rights could be the ’systemic solution’ to the global crisis. He says SDRs are complex but they… Continue

Report: Iran has assembled network of lobbyists that has 'penetrated' administration

WASHINGTON — The number of significant pro-Iran lobbyists has grown and key players have gained access to the new administration of President Barak Obama, a report said.

The Center for Security Policy said veteran Iranian lobbyists, several of them former government officials, have been granted access to the Obama administration.
"A complex network of individuals and organizations with ties to the clerical regime in Teheran is pressing forward in seeming synchrony to influence… Continue

Today there is only one important subject to speak of and that is Obama’s planned “National Service Corps” (The GIVE Act)....a well funded, and a well trained Youth Brigade Organization will likely begin service by this time next summer, according to former CIA operative Robert Chapman, economist for “The Forecaster.”
Recent passage of the bill by the House is expected to be passed in the Senate… Continue

Today, Sunday, March 22 from 8-10 CDT, The Chalice Show airs on Patriot’s Heart Network. We are excited to welcome back Stephen Pidgeon. In a conversation that promises to be lively, Stephen will provide a detailed update on the National Grand Jury. Read about it at http://decalogosintl.org/ Other timely topics as… Continue

Those Judges Are Guilty

It is with profound pride that we are featuring Dr. Orly Taitz, Esq.… Continue

We may well have passed the tipping point

There was a very telling interview this Sunday with President Obama.
Amid the continuing backlash over AIG bonuses, on CBS’s 60 minutes, President Barack Obama is defending his embattled treasury secretary and touting his ambitious $3.6 trillion budget proposal as a boon for ordinary Americans.
And in the interview with 60 minutes, pay attention to when; "Obama noted that corporate executives would better understand the public's outrage over bonuses if they ventured out of New York… Continue

The biting winds of change are blowing through this Nation, and it is time to take a good hard look of what is going on behind the scenes, right under our own noses. The AIG mess is a smoke screen designed to take you away from something that is being done that will cause more outrage than you can imagine. Here it is!!!!! The same "volunteerism" that kept America running since the days of… Continue

Don't miss my Make-A-Statement Radio Show Thursday night at 10:30 Central. Our guest will be Mr Bret Farley, Executive Director of the Minuteman PAC. We will be talking about the problems with our Immigration System, Illegal Immigration, and other issues revolving around our National Borders.
http://www.blogtalkradio.com/make-a-statement/2009/03/20/Make-A-Statement-Radio

you might recall the one he did earlier, "The Second American Revolution"

you might recall the one he did earlier, "The Second American… Continue

Oath-Keepers.blogspot.com - Military and Law Enforcement Pledging to honor Constitution and Protect The People

THIS IS REALLY IMPORTANT! This group has developed an Oath of 10 orders they will DISOBEY because they violate the Constitution and they promise to protect the people. Please pass this along to all law enforcement and military personnel you know (both retired and active… Continue Some thoughts about AIG ... or Pay NO attention to that man behind the curtain.

What really made things even clearer - in my opinion - as the wheels are rapidly coming off this wagon...
Look, We - gave, bailed, loaned the the money ... WE the prying public - and we ARE, we intrude into the lives and operations of people and businesses that a year ago we didn't care and knew NOTHING about - from Bernie Matoff, (what he did was beyond doubt terrible - but was ANYONE HERE biked by him personally?, or Anna Nicole Smith, Paris Hilton, Jessica Simpson's figure, or Chris… Continue

i dont agree with pres Obama's budget. we are 1.3 trrilliom in debt we wants 3.5 trillion wwitch would put usa in 4.8 trillion in debthis omb say defcits are good i dont agree with him at all.he should work on stablizing tthe bank and our economy instead of rasing taxes on us. the cap and trrade would rase taxes 500 billion!move on.org and other loberials are telling him what to do as president! Continue

"Pravda" Reports On New Lawsuit Sueing The President; First President in history to be sued...

3/17/2009: "Pravda" Reports On New Lawsuit Sueing The President; First President in history to be sued:

( NOTE: I have spoken to Mark McGrew, an American Journalist from Texas, and the reason he writes for Pravda is that they are the only News Outlet that prints the suits against Obama. His articles have been rejected by the MSM in the US. The Russians are well aware of the elligibility problems Obama is having. )

A warning to America.

Saint Patrick a Miracle - Be Thou My Vision

Saint Patrick a Miracle - Be Thou My Vision

In the future of our events ... 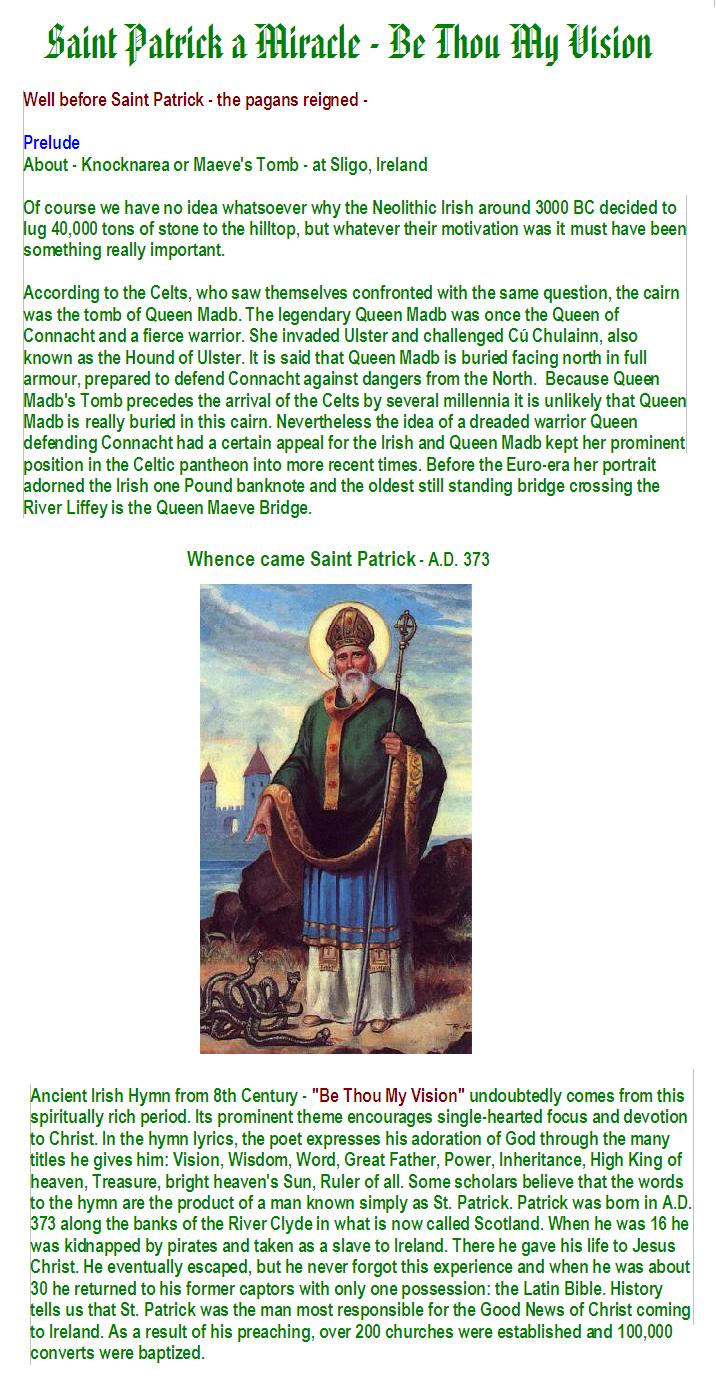