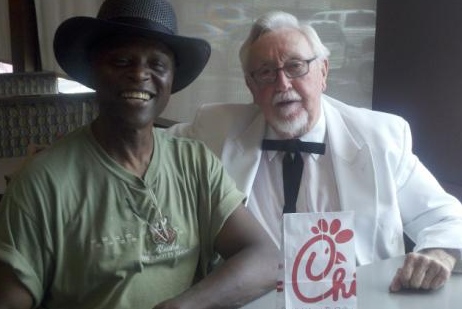 The atmosphere was that of a family reunion; a fellowship event of various churches and Tea Party activists. Despite the traffic jams and having to wait in the Florida heat, the crowd was upbeat and courteous.

The crowd applauded and cheered when a Colonel Sanders look-a-like showed up in support of the cause.

Chatting with the crowd, I learned that numerous local churches were represented.

I hate to bring this up. But I thought, where are the black people. Ninety-nine percent of the crowd was white or Hispanic. There is a local black church with a huge congregation in my community. Where were they? Black folks do not support same sex marriage. So, why were they not standing in solidarity at Chick-fil-A.

I am not putting these black Christians down. I simply wish to know what it will take to get them on board standing side by side with fellow Americans for Godly principles.

Donald Trump: 'I Think a Lot of People Cheat with Mail-in Voting'

The killer, the destroyer,<br>that makes us again one

And Trump Takes Advice From This Quack? ...Dr.<br /> Fauci Says He Will Lift Social Distancing Restrictions<br /> After "No New Cases, No New Deaths" (VIDEO)