Cruz: Finally, A President Committed to Really Fixing It! 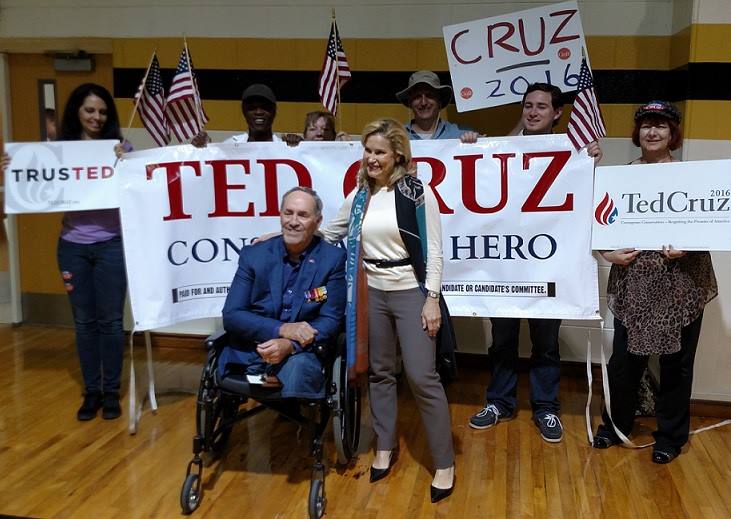 Our Conservative Campaign Committee team has been traveling state to state, boots-on-the-ground campaigning for Ted Cruz in caucuses and primaries. After campaigning for Cruz in Fayetteville, North Carolina, we joined a rally led by Heidi Cruz.

In her speech Heidi shared how Ted fell in love with and memorized the U.S. Constitution as a teenager. Ted also memorized large portions of the Bible. Against all odds, experts and polls, Ted resoundingly won his bid for the U.S. Senate.

Heidi cited her husband's courage. He went to Washington as a Texas Senator fully committed to staying loyal to the Constitution and the voters who sent him. This is why it drives me nuts when I hear clueless voters say Cruz is a part of the problem or Cruz is disliked in DC. I want to yell, “Cruz is not a part of the corrupt system. Cruz is disliked because he is a powerful leader and advocate for We the People who refused to go-along to get-along. Of course, the DC politics-as-usual crowd are going to hate him.”

Folks, as I said, my CCC team and I have been traveling the country attending Cruz rallies. Every time I hear Cruz speak, I think, “Praise God! This is the man we have been praying, longing and waiting for; a president truly committed to fixing all that is wrong in our country, coming out of Washington.”

Each GOP debate has confirmed that no other presidential candidate possesses a better understanding of the issues and has better solutions than Ted Cruz. The best part is Cruz has a proven peerless record of following through with his promises.

Like Ronald Reagan, Cruz continues to outperform the polls and expert opinions. Clearly, Americans have had their fill of our country's downward spiral imposed by Leftist governing. Americans are ready to make a sharp right turn. Cruz will win the general in a landslide. And Lord knows we desperately need Cruz folks. Our country is a mess.

In Nashville, TN, I picked up a local music magazine with an article praising Black Lives Matter. The gist of the article was America sucks for blacks and cops seize every opportunity to murder blacks. News flash: Blacks are murdering each other in record numbers, not cops.

I am black and have witnessed first hand in my family the stifling impact of blacks believing Leftist/Democrats' lies; filling blacks' heads with victim-hood-ism and negativity regarding their remarkable country. The Black Lives Matter movement was founded on the lie that Michael Brown was shot by a white cop while trying to surrender with his hands up. The truth is Brown was shot while assaulting the policeman, trying to take the officer's gun. And yet, the Left/Democrats continue to further the lies to keep blacks believing America is against them and only keeping Democrats in office will keep racist white America a bay. This is pure evil, folks.

Cruz is proud and grateful to be an American and wants to bring us together as Americans; rejecting the obvious benefits of campaigning on the fact that he is Hispanic.

A line in the Bible says “My people are destroyed for lack of knowledge.” (Hosea 4:6) Man, does this scripture apply to black Americans. Thanks to decades of Democrat deception, far too many blacks are ignorant to the truth that they are blessed to be born in America; the greatest land of opportunity on the planet for all who choose to go for it.

Our CCC team spent a night in Asheville North Carolina. On TV in the hotel lobby was a report about Black Lives Matter attempting to hijack a Trump rally. Democrat presidential candidate Hillary Clinton commented how dangerous Trump is. I spontaneously spouted out loud, “No lady, you're dangerous!”

Folks, this despicable woman played a major role in the deaths of our U.S. ambassador and three other Americans in Benghazi and lied about it. Hillary looked Pat Smith in the eye and lied to the grieving mom about the circumstances which led to the death of her son in Benghazi.

Hillary headed the Bimbo Eruptions initiative to persecute and silence all the women with whom her husband, President Clinton, had a sexual encounter. Hillary sells government access via $250,000 fees for her speeches. Her email scandal is criminal and a major threat to national security. Her arrogance, condescension, superiority, and sociopathic lying are extremely dangerous. As a black American, it is particularly insulting to hear Hillary attempting to sound black when addressing black audiences, trying to fool us dumb colored folks. Everything Hillary and her fellow Democrats say or do is designed to deceive.

Ben Franklin said, “The sting of rebuke is the truth.” Folks, I can hardly wait to see Ted Cruz sting Mrs Clinton's derriere with the truth all over that debate stage. It is time that the American people see this corrupt, evil and sociopath presidential candidate, Hillary Clinton, for who she really is.

Ted Cruz is a huge blessing; a breath of fresh air. Honest. Straightforward. Cruz promises to rescind Obama's thousands of job-killing regulations. He also promised to repeal the disastrous ObamaCare.

Cruz said “The social safety net should be a trampoline and not a hammock.” As a black American who has witnessed Democrats crushing the hopes, dreams, and potential of members of my family by addicting blacks to generational government dependency, I view Cruz's statement as tough-love; real compassion.

Cruz promises to abolish the IRS; replacing it with a flat tax that Americans can file on a postcard.

God promises to bless those who bless Israel. Cruz promises to restore our relationship with our longtime ally, Israel. Ted Cruz is our guy folks. C'mon, letting come together as Americans and rally behind this once in a lifetime opportunity to vote for someone with the know-how, character and commitment to really fix Washington for We the People. Let's rally behind Ted Cruz.

Senator Cruz can never ever be President.  He is not a Natural Born Citizen as required by our Constitution

Senator Cruz is Hillary's ONLY path to become President.  She will loose to all others.

If Cruz was any threat, there would be protests much like at Mr. Trump's events.  But since the left ignores Senator Cruz, this is a huge hint as to why.  Hillary wants Cruz to be the nominee!