Folks, I am a black singer/songwriter who has been in the Tea Party from the beginning. In 2008, Our Country Deserves Better PAC invited me on their “Stop Obama” national bus tour. In 2009, I wrote the “American Tea Party Anthem” which I performed at Tea Party rallies on 14 national bus tours with Tea Party Express and others. 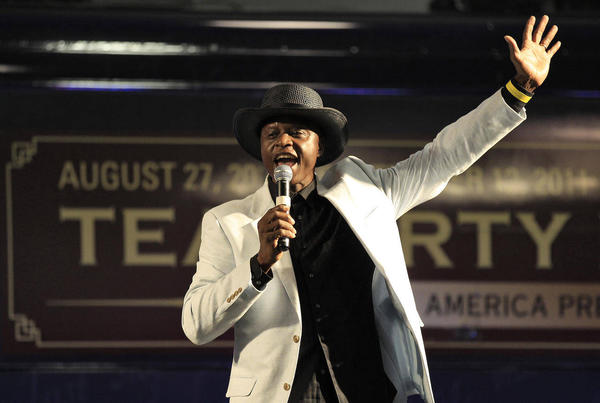 It has infuriated me the way the despicable fake news media intentionally branded the salt-of-the-earth good Americans at the rallies a bunch of redneck racists vehemently opposed to America electing its first black president. Nothing could be further from the truth.

Many of those folks at the rallies excitedly voted for Obama assuming it would heal America's racial divides. They became aware that Obama was the Left's bait and switch president; running as a moderate – governing like an out-of-control lawless far-left radical.

Folks, Tea Party people are not racist. They love their country. They desire equal justice for all Americans. They do not want government dictating how to raise their kids and micromanaging their lives to achieve the Left's absurd goal of equal outcomes.

Along with media from around the world, CNN was embedded on one of the Tea Party Express tours. The CNN reporter attended 35 rallies for a CNN documentary. I was a headliner, opening every rally, rocking the house with my “American Tea Party Anthem.” I closed every rally with a powerful rendition of “God Bless the USA” in which I invited every veteran in the audience to join me on stage. Audiences spontaneously jumped to their feet, cheering and applauding as vets made their way to the stage. The crowds expressed extra enthusiastic love when a WWII vet made his way or was helped to the stage.

The people loved me and I loved them back because we were united in our love for America and our desire not to see her transformed into a socialist/progressive Godless nation. Rally attendees treated me like a rock star; purchasing my CDs, asking for autographs, asking me to take pictures with their kids. 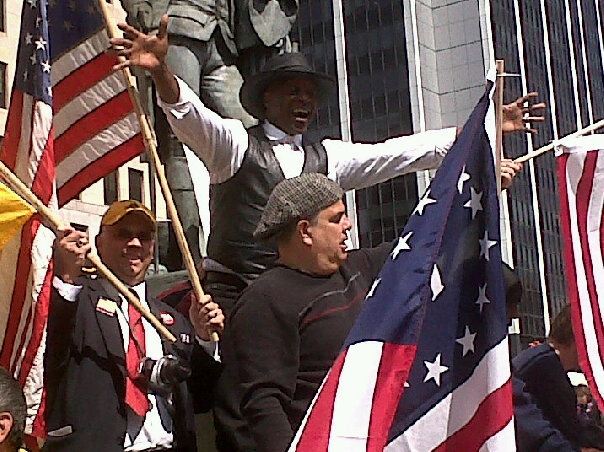 When the CNN documentary was aired, not one time was my black face shown, nor were black Christian publishers William and Selena Owens, Kevin Jackson, Herman Cain, or other black speakers at the rallies.

Consequently, my 80-year-old black dad believed the Tea Party was a bunch of hate-filled scary racist white people because he heard it on CNN. I said, “But dad, I'm on the tour bus and they allow me to ride up front!”

As I said, the complete opposite of the fake news narrative regarding the Tea Party is true.

In Texas at a Tea Party rally, a white cowboy approached me pushing a stroller with two black babies. The proud father of adopted babies from Africa said he and his white wife asked God to give them kids who needed their love. He was excited about his babies soon becoming American citizens.

In Michigan at a rally, a white woman in a wheelchair, spotted me. “Oh my gosh, it's Lloyd Marcus! Can I please have a picture with you?” The woman's adult daughter told someone on our staff. “My mom is dying. She said all she wanted to do was meet Lloyd Marcus.”

Tea Party attendees endlessly apologized to me for opposing the first black president. Folks, I could go on and on with fond memories of heartwarming incidents, acts of kindness, love, respect, and tearful moments of patriotism.

So, when fake news media goes messin' with my tea party family, they're on the fightin' side of me. The decent, hardworking, orderly, and responsible patriots in the Tea Party have been purposely slandered by the fake news media. It is beyond disgusting.

Meanwhile, the scum-of-the-earth Black Lives Matter, which encourages blacks to kill white people and cops, is celebrated in the fake news media. Though unreported, black attacks on whites and ambushes and assassinations of police have skyrocketed.

Since election night when We the People stunned the fake news media by defeating Hillary, Leftists have literally lost their minds with vitriolic hate for us. Obama and Soros launched violent hate groups and protesters to wreak havoc in our streets to create the illusion that a majority of Americans hate Trump.

And now, fake news media has the nerve to place the Left's paid deranged, violent, and chaos-producing thugs on a higher moral level than the Tea Party. Heaven forbid.

Author: “Confessions of a Black Conservative: How the Left has shattered the dreams of Martin Luther King, Jr. and Black America.”

While we hope with President Trump we sure hope we have won a major battle.

Yet the war continues.

Sir, I will follow you as we continue the fight to restore America.

Hi SGT Geresy, Thanks for your service to our country brother. Yes, we had great times together, united in the battle to restore America.

I am a proud TEA Partier.  I have met you twice in my Michigan.  Myself and my Veteran Girlfriend have joined you on stage.  Thanks!!!!

What the left is calling the left wing tea party is little more than NAZI Soros paid trouble makers.  It is as fake as fake can be.  Each time they have tried to pay to form a tea party, it has failed.  This is doomed to fail as well.  No amount of NAZI Soros money can create a real TEA Party.

Money didn't create the TEA Party.  It was people that saw the Nation going the wrong way.  They united all over the Nation to voice their strong concerns.  It wasn't money.  It was ideals.  It was a sincere love of America.  That hasn't changed despite all the fake news.

The TEA Party came into being to hold Usurper Soetoro accountable.  We came together to counter the fake news that everyone supported Soetoro.  We came together to oppose the lie that still is Barry's Death Care.  We didn't riot.  We didn't burn private property.  No riot police were needed.  The few police I saw were bored when it came to policing us!  Yes, we were loud, but we weren't profane.  We shouted out our frustration, but we didn't threaten those we opposed.  We obeyed the law, we didn't break it.  That is why the extreme left can't fake us!

We will hold President Trump accountable.  We will applaud and back him when he is right.  We will point out when he is wrong.  We sure hope that isn't often, but will happen when needed.