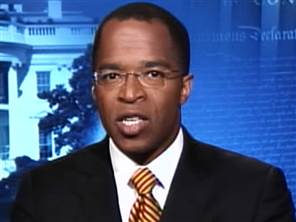 Mr Capehart, your Washington Post hit piece insidiously designed to smear Chris McDaniel who is a decent and honorable man goes beyond the pale of low-rent race-baiting politicking. But, I get it. You are black which grants you carte blanche to irresponsibility yell racism in a crowded political theater whenever it fits your fancy.

We know the drill. You want to take out a bold, outspoken, popular conservative Republican, by calling him/her a racist. The accused Republican is then supposed to cower in fear and spend time and resources explaining when they stopped figuratively beating their wife. Well, that “ain't” happening this time. As a black American, I find your tactic deplorable, divisive, racist and evil.

Yes, I said evil. In our sophisticated times, the “e” word is seldom used. But, I call it like I see it. In typical Democratic party manipulative, race-baiting and hate inspiring fashion, you guys take everything to it's ultimate extreme.

For example. McDaniel along with millions of Americans have had enough of Obama's unlawful power grabs, trashing of the Constitution, lies and bullying of Americans who dare to challenge him. Obama even said, “We punish our enemies”.

You Mr Capehart have despicably attempted to smear and silence McDaniel and the millions of Americans who oppose the tyranny of Obama acting like our king. You have attempted to brand them a bunch of anti-government extremists, racists and gun toting fanatics in solidarity with murderers. Your accusation is outrageous. Dear Lord, have you no shame? Whatever happened to reasonable political debate?

But that is how you guys roll on the Left these days. No tactic is too low, too despicable or too racially polarizing. National race relations be damned as long as your liberal, big government advocating candidate wins and the socialist/progressive agenda is further implemented. Long gone is my dad's Democratic Party.

The mission of the Democratic Party is tyranny. Agree with everything we force down your throats or we will destroy you; expect an audit from the IRS, a visit from the EPA or armed federal agents showing up at your home.

Mr Capehart, your unconscionable attempt to gin-up hate will fail. My faith tells me that good triumphs over evil. Chris McDaniel is a good man; a strong conservative voice for We the American People. http://bit.ly/U0cPvJ

With millions of Americans in his corner, McDaniel will emerge victorious in the June 24th Mississippi runoff election. We have right and God on our side.

Great post, Lloyd. I appreciate you speaking up about this truth!