Ted Cruz: It's In His Heart

“Unfortunately Mr. Marcus, it's not only the left but also the right that is out to destroy America. Wicked people in high places, the elite if you will, control both parties. That is why no matter who is elected that nothing changes.”


This patriot brother's discouragement explains why I want Ted Cruz in the driver's seat as president. On numerous occasions, Ted Cruz has proven that he has no problem being odd-man-out with regard to Washington politics. 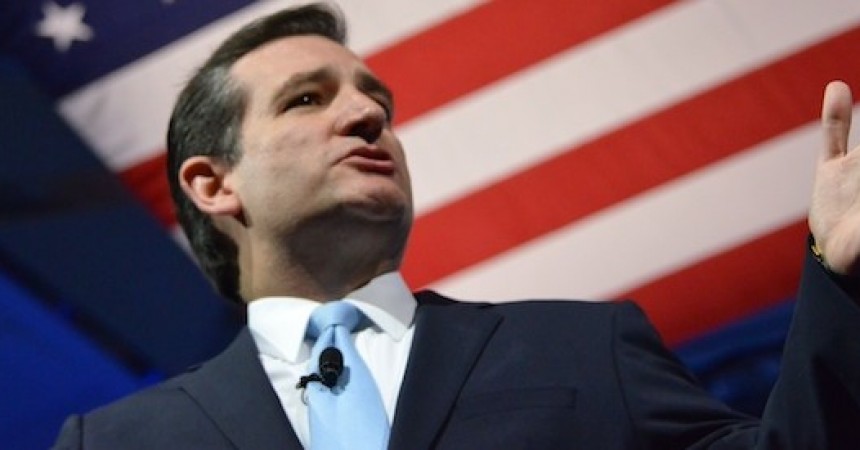 I have made the following point numerous times. Politicians promise the moon on the campaign trail. The 64,000-dollar question is who will have the cojones and core conservative instincts to follow through if elected? Atop my list is Ted Cruz.

A gospel classic is titled, “It's in My Heart.” Folks, Ted Cruz has proven that conservatism is in his heart. Our only hope of liberating ourselves from the “Washington cartel” (both parties conspiring against the people) as Cruz perfectly described it is to select a presidential nominee with conservatism in his/her heart.

Cruz is well experienced in being hated by both political parties and the media. He acts like a duck, allowing their relentless venomous rebukes to roll off his back. Cruz stays laser focused on doing what is right for God, country and We the People. That's what has me standing up and cheering for Ted Cruz.

I love Dr. Ben Carson. However, early in his campaign, I wrote an article praising Dr. Carson for standing firm on a non-PC comment he made. My publisher informed me he could not publish the article because Dr. Carson apologized. As I stated, I highly respect and love the man, but that action scared me folks. Early in his campaign, political inexperience prompted Dr. Carson to imply that he may be open to controls on owning a semi-automatic weapon depending on where one lives.  Dr. Carson now stands strong for the Second Amendment.

Trump's success at slapping PC in the face has emboldened other presidential contenders to do the same, including Dr. Carson. Will Dr. Carson stand strong for conservatism if elected president?

Donald Trump has been a huge blessing, voicing the frustrations, outrage and desires of millions who long to see America made great again. It is quite remarkable that because of racial guilt, we have allowed an anti-American regime to dethrone us as the world power and transform us culturally, morally and economically for the past seven years. But I digress.

Unquestionably, if elected, Trump will make positive changes regarding our economy and immigration. On social issues extremely critical to who we are as a people, I do not sense much passion, urgency or commitment from brother Donald.

Ted Cruz is the total package.

Cruz fearlessly called out the CNBC debate moderators, exposing them as “left-wing operatives.”

Democrats arrogantly refuse to obey laws they do not like, such as immigration law. This same bunch of Democrats/Leftists jailed Christian clerk Kim Davis. Davis refused to betray her faith by issuing same sex marriage licenses. Some Republicans/conservatives faltered. Cruz sent out a clarion call to “constitutionalists and lovers of liberty” to stand with Kim Davis.

Cruz promises his first day as president will be extremely busy. He will “rescind every illegal executive action taken by Barack Obama,” including his “executive amnesty.” Cruz will instruct the DOJ to investigate Planned Parenthood and prosecute any criminal conduct uncovered.

Obama has been using the DOJ and IRS as his personal hit squads against anyone opposing his transformation of America. Cruz promises to instruct both agencies to “cease persecuting” individuals for standing up for their rights.

Remember the Catholic nuns that have been helping the poor and elderly since 1839 bullied by Obama for not signing on to birth control against their faith? Cruz said as president he will send the Little Sisters of the Poor a letter dismissing their case. Cruz would also invite them to the White House to tell the world their story.

Continuing his first day in the Oval Office cleaning house, Cruz will end Obama's catastrophic Iran Nuke deal. Ending day one as president, Cruz will begin the process of moving the U.S. embassy in Israel to Jerusalem. Cruz said moving our embassy to Israel's “eternal capital” sends the world the message that we stand with our allies.

Folks, any one of our GOP presidential contenders is far superior to soulless politician and sociopath Hillary Clinton. Hillary in the White House would be a continuation of the Barrack Obama nightmare. The only difference is the MSM would characterize opposing Hillary's far left radical policies as sexism rather than racism. You know the drill folks.

Therefore, I will wholeheartedly rally behind our GOP nominee -- Dr. Carson, Trump or any of the others.

But the candidate who checks all of my boxes for not giving a rat's derriere about what the Washington cartel and media thinks of him; the candidate who places America and her people first; the candidate who is unapologetic regarding his Christian faith; passionately defends liberty and honors our Constitution is Sen Ted Cruz. Will Cruz remain the same person when elected? You betcha!

Cruz is such a perfect candidate, isn't he? I've read the following repeatedly: Cruz is INELIGIBLE to be president. It seems clear to me although argued in many circles. Will Americans "look the other way" when it comes to "our side?"  Although, how many realize we now have a Uni-Party in D.C., not two parties.  How many realize the Democrat Party is actually The Communist Party and has been so for many decades.  As the author points out, the GOP is blatantly corrupt. Regarding Cruz, I am very leery that his wife was a member of the Council on Foreign Relations.  She conveniently left the Council when Cruz made his decision to campaign for president.  To me this makes Cruz a proxy member of the Council on Foreign Relations, as he has no doubt benefited from their power in his climb through politics. It is also very convenient for him that his wife is a vice president at Goldman-Sachs.  Once again, and conveniently, she has taken leave from her private wealth management job at Goldman to help with her husband's illegal campaign for the presidency.

In order to be a 'natural born citizen', BOTH parents must be U.S. citizens at the time of the birth of the child which is why Cruz, Rubio and Jindal are all INELIGIBLE to run for president.  None of them apparently give a damn.  Cruz continually speaks about character, loyalty, honor and praiseworthy attributes, yet how does one trust any who knowingly violate the constitution and deceive the populace with the paid-for rhetoric we all want to hear and believe?  These campaigns are saturated with billions of dollars from power players who want to get their hands on the White House, and those campaigning hire the best public relations teams in the field, the best that millions of dollars can buy, who take the "temperature" of the public and feed us the jargon that we want to hear.