The Beat Goes On: Opposing Obama is Racist. 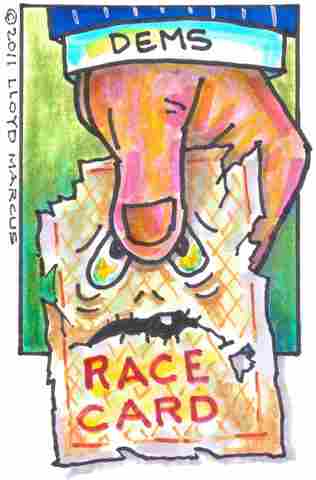 
It is stunning that reporters can not see the absurdity and racism against white voters in their assumption that Tea Party membership (push back against Obama's agenda) equals racism.

For the first time in U.S. history are Americans required to submit to their president's agenda or suffer the mainstream media and Democratic party branding an “R” on their forehead for racist? Does our president's skin color repeal our right to disagree with government?

The MSM and Democratic party declaring all opposition to Obama's agenda racist is a despicable divisive tactic. They are exploiting Obama's skin-color to further their socialist/progressive agenda (full court press hostile government takeover of our lives).

Another question repeatedly asked by reporters is, “If the Tea Party is not racist, why are its members mostly white?” I reply, “Could it be that a majority of black voters are ill-informed, clueless and/or racist? Why are you making the Tea Party responsible for blacks not showing up?”

In 2008, when I heard presidential candidate Barack Obama tell Joe-the-Plumber that he wanted to spread the wealth around, I knew Obama was a socialist and the wrong man to lead my country.

To my utter amazement, who Obama is as a human being and his plan for America was totally irrelevant to my family, friends and 96% of black voters including some black conservatives and Republicans. It was a black code thing. Support the brother no matter what.

My decision to campaign and vote against Obama due to his far left radical associations, pro infanticide voting record http://bit.ly/1cIIVSp and socialistic vision for my country made me an outcast and a traitor to my race. Is there a monolithic “racist” black vote? You bet there is. Black racism is as evil and unacceptable as white racism.

White liberals were equally outraged that I dared to judge Obama by the content of his character rather than the color of his skin. White liberal paragons of fairness, tolerance and self-proclaimed champions of minorities called me a “stupid self loathing n*****” for not voting for Obama.

Along with millions of white Obama voters shocked and outraged over his unprecedented takeover of the auto industry, banks and repeated ignoring of the Constitution, I joined the Tea Party.

The MSM and Democratic party are insisting that we surrender our will and our country. They demand that we act like brain dead obedient supplicants of King Obama, less we risk public humiliation charged with racism. Heaven forbid.

Hall of Fame baseball player Hank Aaron is the latest black celeb to call opposing Obama equal to being a member of the KKK. http://bit.ly/1k17bSY Hank, I love you bro. But your accusation is racist, evil and beneath you.

How are you, Mr Aaron, suddenly able to read the hearts, minds and intentions of the entire GOP and millions of Americans in the Tea Party? Can you not see how insidiously evil, intellectually vacant and tyrannical it is to brand all opposition to the president's agenda racist?

And yet, to silence the GOP and conservatives, the mainstream media and Democratic party continues to promote the ridiculous narrative that “opposing Obama is racist”. This tactic has successfully rendered most of the GOP impotent, cowering in their boots, fearful of that hot “R” brand on their foreheads. Many well-intentioned Americans have been silenced.

I submit that we conservatives and Republicans rip the racism branding iron from the hands of the MSM and Democratic party and point it in their direction. They are the true racists.

White America, when the left calls you a racist for pushing back against socialism, let it roll off your back like water off a duck. America is far too precious to allow it to be destroyed (fundamentally transformed) by the MSM and Democratic party's use of racial intimidation, race baiting and race exploitation. We can not allow ourselves to be silenced.

The MSM and Democratic party have no problem with setting back national race relations, polarizing Americans along racial lines to implement their mission of government controlling every aspect of our lives.

To defeat the MSM and Democratic party, you must support and vote for conservatives beginning with the 2014 elections.

We can and we must take back America. http://bit.ly/1oM2zVm

You, my friend were one of the first to really put himself out there.  You may not know this, but you helped to inspire me, too.

If you oppose Usurper Barry Soetoro:

a) You want the Constitution followed.

b) You are Patriotic.

c) You are an American first.

d) All of the above.