The Fast And Furious Fairies of Never-Never Land 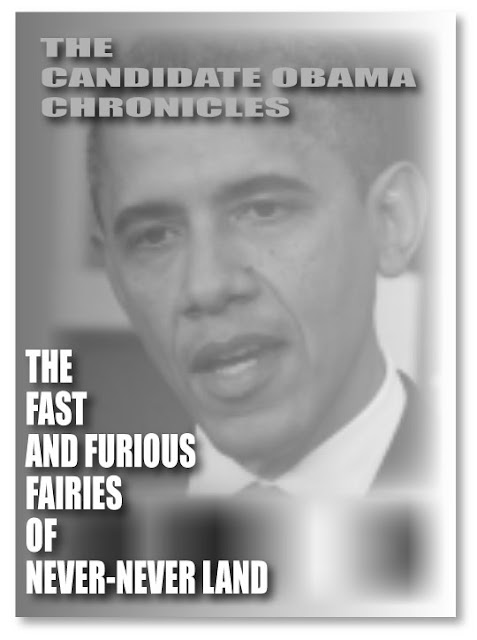 The sheer, blatant, open arrogance of Attorney General Eric Holder's denials and stubborn refusal to accept responsibility and accountability for the fiasco now known as Operation Fast and Furious can be easily explained by observing the obvious, instead of focusing on his stonewalling against a Congress attempting to get to the truth and to the bottom of a program, which to date, has cost the lives of two law enforcement officers.

The real calamity, beyond the tragedy of the loss of Life at the hands of incompetent administrators and agents, is the counter-intelligence coup of a group of narco-terrorists against a severely unqualified, incompetent, naive, unprepared, improperly led, spineless Justice Department, which has been no match for a heavily financed, heavily armed, determined force of Mexican Drug Cartels.

Without overlooking the attempted ruse of channeling the efforts of a program, that had already been started by the Bush administration, to track the possible flow of weapons from the U.S. into Mexico, and turn it into a justification for the passage of anti-gun legislation here in the U.S., it has also become clear that the Obama Administration and the Justice Departmentnaively set out to advance their gun-control agenda legislation without thinking through who they were using as a patsy to push their own shallow political ends.

The administration obviously thought they could set-up the Mexican criminal element, take them on without any consequences, and use them to attempt to draft laws that would suit the Obama anti-gun effort here in the U.S.

It was a mis-match from the beginning.

For starters, the Obama administration, including the Eric Holder Justice Department, is the administration of "apology." Obama has shown over and over that his policies of propitiation to our enemies, opponents and rivals, and his projection of a weak nation "leading from behind," are sufficient to invite any and all antagonists seeking to take advantage of perceived American weaknesses to take a swipe at our nation and its interests.

We have received threats and agression not only from the Russians, but from the Chinese, the Iranians, and any little pip-squeak dictator from Hugo Chavez to Mahmoud Ahmadinejad, who happens to want to make a name for himself at the expense of America, because of the Obama/Holder agenda of the weak.

So what did this cumbaya administration, expect when they decided to take on a violent, well-armed, determined organized group of crime syndicates intent on dominating our neighbor to the South?

If the Fast and Furious premise was that guns were traveling from here, South across the border into the hands of cartels, did they assume the cartels would just roll over and let them stop the weapons trafficking "just because" Obama and Holder were conducting the operation? Why would Obama/Holder not prepare for all-out war with the cartels, since they had obviously taken on the task of cutting off the "life-line" weapons supply of a major potential enemy force?

Not even the most innocent fairy in "never-never land" would believe there would be no repercussions in such an endeavor.

A criminal drug cartel would not care if the program was merely a cover to pass legislation against guns in the U.S. Whether it was as a pretense or as a real threat to cut off weapons trafficking, it would not matter to a cartel that makes a point of being extremely visible with their terrorist acts in order to show how forceful and powerful they are. In fact, they have been known to murder journalists in order to make examples of them for merely reporting about cartel atrocities.

And while the Fast and Furious program is despicable, both for their covert motives and for the flubbed results of their stated mission, there are aspects of this fiasco that have not been addressed by the Congressional allegations or anything that is visible in the volume of documents that have finally been obtained from the Justice Department.

Looking at this in perspective, events show in the proper light, a panorama painted with a much more ominous brush.

First, unless you are living in Obama/Holder's "never-never land," you must know that nothing and no one crosses our borders without being detected somewhere in our vast network of electronic and human monitors. Post Viet Nam War technology provided sensors planted along the American side of the Rio Grande that could tell you not only whether there was a human or a cow in the vicinity of that sensor, but could calculate its approximate weight. That was late 70's technology. That has advanced exponentially since then.

Today's smart bombs guided by lasers and tracked by video can put a bomb through a window from miles away. Drones can monitor the armed forces of an entire nation from a neighboring country or from hundreds of miles away, thousands of feet in the air. Back "in the day" a satellite could take a photograph of a license plate on a car from outer space. Today with electronic advances, surveillance and monitoring is much more advanced.

Additionally the network of "operatives" along the border is such that you would be hard-pressed to find "undercover" agents that were not in the employ of some illicit or illegal operation along our southern border, spying for the CIA, FBI, DEA, etc. As an example, allegedly, an Iranian agent was caught plotting an assassination of a Saudi diplomat recently, when he approached what he thought was a criminal, but in fact it was someone in the employ of a U.S. agency operating in Mexico. This "accidental" event testifies to the preponderance of such personnel.

The illusion of an unsecure and undefended border is an image propagated for political reasons. While some advance the argument that there are few military bases and therefore too few military troops guarding the border, there are enough bases in proximity of the border to transport within minutes lethal air power to deter any organized incursion across that border. Troop and equipment transports, jet propelled, as are the C-17s, can be dispatched to the border without delay.

If hunters in the North American wilderness can keep track of deer traffic in dense forests with deer tracking cameras do you doubt that the forest of digital monitors along the border might outnumber even the quantity of foliage available to conceal it?

This, unfortunately is not the problem.

I say again. Nothing gets across that border, no one sneezes there without someone in some outpost or in some base knowing about it. Not illegal aliens. Not drugs. Not weapons. Not any kind of contraband of any significance.

In fact, one would do well to smile for the cameras and sensors and to understand that the sweaty vendor selling pinatas in the hot sun, is probably spying on or tracking a cartel, or is a cartel operative spying on law enforcement.

It prompts the question then: "How is it that illegal aliens, drugs, human trafficking get across the border?"

I invite you to ponder that question in light of available evidence. To conclude anything else but: "Because it is allowed to do so" is to negate the refusal of Homeland Security to enforce the security of the border to prevent illicit traffic across the border, and to negate also the punitive actions by the Justice Department against States for wanting to take matters into their own hands to protect their citizens.

It would take an amazingly, astonishingly stupid individual to launch and administer an operation of the type that Operation Fast and Furious is purported to be, and not know the context, the danger, the ramifications, and the possible consequences of undertaking such an operation.

However, the Fast and Furious Fairies of "never-never land," having come across the file of such a program, which, because it was started during the Bush administration, thought that in a pinch they could avert responsibility for a mistake with "plausible deniability,"  apparently believing that they had been handed such a treasure trove of a plan that they could implement it in secret, document illicit activities to justify their pink-pony agenda, and flitter-flutter across the boundaries of two nations, violating international law and the laws of the United States they have sworn to uphold, saw fit to engage a formidable enemy, believing they could do so without any retaliation and without suffering any consequences.

The Congressional hearings may not reveal the dispicable incompetence with which these Fast and Furious Fairies operated, but Americans should know that Operation Fast and Furious reveals an Administration way over its head in the turbulent waters of an evil they cannot even begin to fathom; that the "operation" was turned around on them by clever terrorists and criminals, and that the demonstrated incompetence has cost lives, will continue to cost lives in the future, and reflects further upon similar consequences that have occurred in other parts of the world.

The assassination of 22 Seal Team Six personnel, along with eight other personnel, when their transport was downed during a rescue mission in Afghanistan HERE

The Compromise of covert operatives in the Middle East, resulting in torture and executions HERE

The wholesale betrayal and surrender of Iraq to Iran HERE

The mass murder of Fort Hood, Texas soldiers at the hands of an Islamist infiltrator HERE

While the bumbling Attorney General attempts to displace blame and responsibility for a project that blew up in his face, and which now has catalyzed Congressmen to call for firings and impeachment, the Fast and Furious President golfs in "never-never land," flies to Kansas in search of another Yellow Brick Road to Socialism, and waves his Presidential wand to attempt to avoid the caldron of consequences for transforming the American Dream into a Socialist nightmare.

It's Nero fiddling as Rome burns: A clueless President campaigns for re-election, oblivious to the destructive actions of an irresponsible Attorney General, pretending not to notice they have been dealt a severe counter-intelligence blow by criminal cartel operatives in Mexico.

Inexperienced, incompetent, irresponsible, oblivious, Candidate Obama campaigns for four more years at the helm, when his term expires in 2012.

He should be the one to be impeached; he should resign in shame, and take with him the catastrophe named Eric Holder when he goes.