Michigan Republicans on Saturday endorsed Kristina Karamo, a contender backed by former President Donald Trump, to be their party’s candidate for secretary of state.

Karamo, who has repeatedly cast doubt on the 2020 election results, is now all but certain to go up against the incumbent, Democrat Jocelyn Benson, in the closely watched swing state this fall.

In Michigan, the secretary of state is the top…

President Joe Biden’s poll numbers are triggering panic mode for some Democrats ahead of the 2022 midterms, strategists said, according to The Hill.

“It’s bad,” an anonymous Democratic strategist said, according to …

You have to read it to believe it, so here's the screenshot: 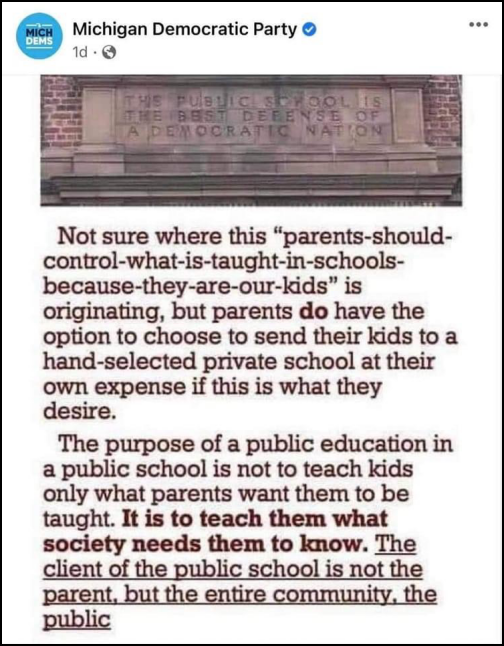 Democrats don't understand where "this parents-should-control-what-is-taught-in-schools-because-they-are-our-kids" thing is originating – because it originates from common sense and decency, which are foreign and confusing to Democrats.

A group of German physicians joins the chorus of experts who have discovered foreign objects in the coronavirus vaccines and the blood of the vaccinated.

German Pathologists presented an analysis of the coronavirus “vaccine” during a shocking press conference in September. A clip of the conference, which has been translated…

When it comes to anything related to Covid-19, leftists have become experts at distracting, blaming, obfuscating, censoring opposing views, and outright lying in order to…

Scott Morefield
A  shocking percentage of Democrats support the enactment of tyrannical Covid-19 measures on unvaccinated people, according to a Heartland Institute and Rasmussen Reports…
Continue

An emergency brake to stop a runaway Supreme Court

The U.S. Constitution is once again under attack. It has survived attacks in the past from war-time presidents, hard-line Congresses and confrontational states. But this time is different because the aggressor is the Supreme Court - the one institution whose sole task is to protect the Constitution. Will the Constitution withstand this latest threat, and what can be done to rein in the…

The deadly sneak attack may seem a distant, dying memory, but we must never forget, nor ever become complacent.

Eighty years ago today, John W. Finn was under fire. A chief petty officer in charge of an ordnance crew at the naval air base at Kanoehe Bay, Hawaii, Finn had been awakened by a popping noise, so he hopped into his car and headed to the air hangars a mile away to investigate. Then a…

What was founded in 1865 in London, England, as both a protestant Christian church and an international charitable organization, the Salvation Army has now embraced Critical Race Theory.…

Disclaimer: The following is an in-depth interview with Nurse Helen Smith and is comprised of her personal experiences from the past year.

This trail has been a miscarriage of justice from the very start.  Self defense is a right.

Who is to blame?

I blame the Mayor and Governor for not stopping the rioting at the very start.  That led to Rittenhouse going to Kenosha.  No riot, he would have stayed home.  If politicians had done their sword duty, two people would possible still be alive and the other not wounded.

We do have the right to voice and if needed loudly voice our views.  We do not have any…

When Christians approach the contemporary UFO and extraterrestrial phenomena, they would be best advised to keep two things in mind that are distinct yet interrelated. Firstly, irrespective of whether UFO's exist or not as an objective or verifiable phenomena, they do in terms of the minds of those that believe in them and draw from them an inspiration as a mechanism for understanding man's place in the broader universe. Secondly, if what those claiming to have…

A humble, lifelong resident of New Jersey – who has been a commercial truck driver for 25 years, has had absolutely no political experience, and was equipped with an airtight grassroots budget – has almost assuredly unseated the second most powerful politician in the state after he spent just $153 – not a typo –…

We are in serious trouble in the United States of America. We have a mostly incoherent “president” that over half of America doesn’t believe was elected fairly. Joe Biden is likely taking orders from unelected people working behind the scenes with an agenda that is so evil that, if exposed by our dishonest media, would shock our nation to its core.…

The Biden Regime is targeting political opponents and using the might of the federal government to abolish the First Amendment by classifying dissent as “domestic terrorism.”

Merrick Garland’s letter to the FBI…