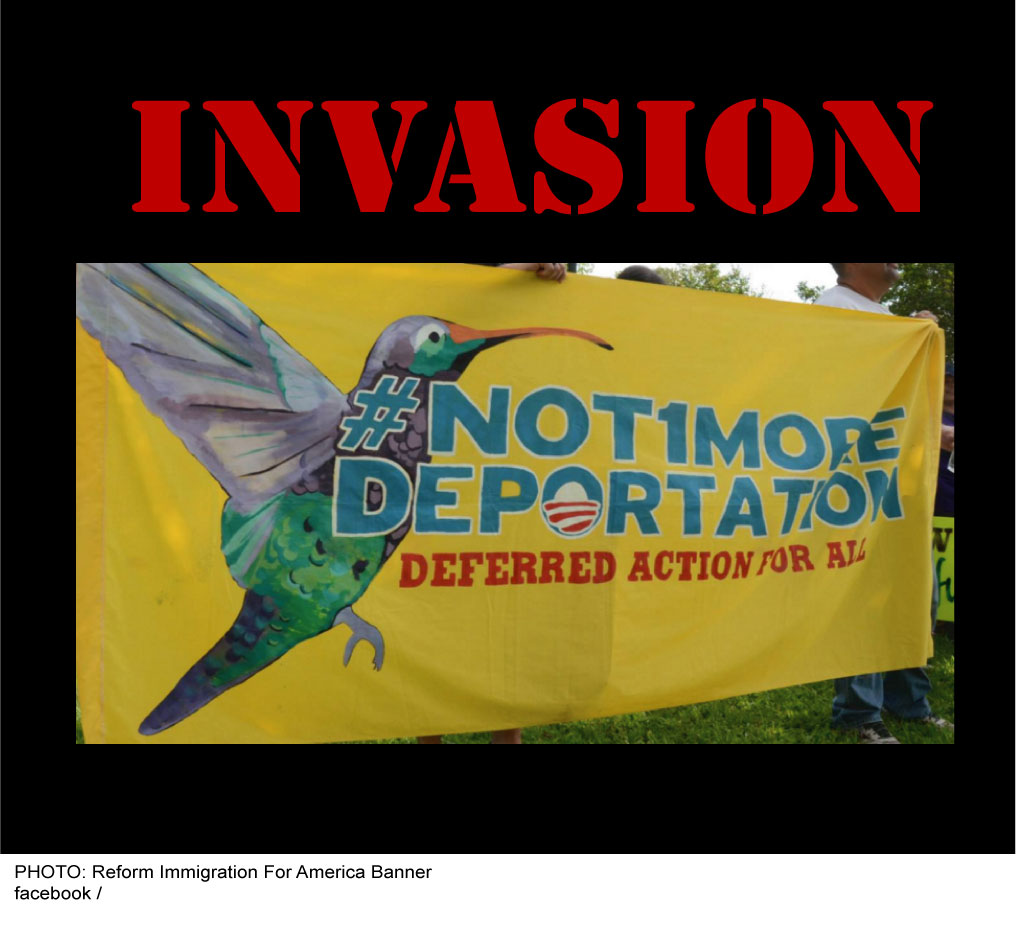 At least two of the Republican candidates were pandering to the pro-amnesty crowd in Tuesday's presidential primary election debate.

Ping pong or patty cake, the candidates that pussy-foot around the issue of illegal immigration are doing so to hide "in plain sight" an invasion that has been ongoing for decades.

In fact, calling it anything other than an invasion is a method of avoiding the truth and perpetuating a lie.

Illegal immigration would amount to a  minimal number of individuals, who either because of a lack of enforcement personnel, or because of luck or chance, managed to penetrate our borders.  Their numbers would be insignificant, and they would succeed in hiding "in the shadows" only with the help and aid of relatives or allies, who would help them to exist here illegally and in hiding.

What we have is not illegal immigration.  Those that have crossed the border into the U.S. without going through proper channels ARE illegal immigrants, but because of the quantity and their impact upon our country and our institutions, the act of crossing our borders has become something else.

What has occurred and continues to occur is not illegal immigration.  It is an INVASION.

The people that have come across the border have done so willfully in order to avail themselves of employment opportunities and the resources and advantages that are available to citizens of this country.

Nor have they come here temporarily to then leave.

Throughout the United States, in any major city, you will find enclaves, cliques, and communities of INVADERS.  They are not living in the shadows.  In most cases they have planted roots and are either employed and/or living "off the system" in some way.  They have established an economy and an accompanying culture.

There are a multitude of lobbyists for these invaders, from advocates in the media, to non-profit organizations, to politicians, and local and national chambers of commerce.

The cost in crime and its consequences, and the cost in resources, infrastructure, and social impact is enormous upon the country.

As an example, circa 1998 in the Houston, Texas area, a substantial percentage of construction projects were being effected by illegal alien crews.  These crews were run by illegal alien foremen, supervisors and contractors.  A native worker applying to be part of these crews would be rejected politely and/or would never be called on for hiring.  Hiring for these crews was (is) done by hiring within the illegal alien community of a particular crew.  In a specific crew, the hiring was done from the home town in Mexico, where a majority, if not all the crew members hailed.

Most if not all of the members of these crews had apparent legitimate documentation, probably very good forgeries.  Many owned homes, or rented or leased them, and many "doubled up" in residences, which amounted to dormitories.

This invasion and occupation is being assisted by their "home" government.  In this case, specifically it is Mexico.  The motive is MONEY, not just for the workers, but for the government of Mexico, which encourages "migration" to the United States.  This should be stated correctly:  Mexico encourages invasion of the United States by its people.  These invaders, in 2013 estimates, were sending $23.17 Billion (with a "B") back to Mexico annually.

Totals sent to other countries including Mexico amounted to $530 BILLION in 2012.

The Mexican government is benefiting from this invasion to the tune of over $23 Billion dollars added to their economy in hard cash.  This is not counting the adjacent and residual effects of this amount of money added as a booster to the economy as an economic multiplier.

While there are those that argue that this large workforce is an actual benefit to the U.S. economy, others assert that instead it is a drain.  In fact this alien invader "work force" is being subsidized by taxpayer revenue, not just in the form of social, welfare, and medical services, but with tax exemptions and credits.  Many, because they earn under a certain amount of income, do not pay any taxes at all, and in fact, because this is so, qualify for "earned income tax credits."  This is not "credit" by any means.  They get a check that they can cash.

What do we get in return for housing and caring for these invaders?  From Mexico we get, as a direct import, a massive influx of illegal drugs, which when imposed on communities, exact a tremendous cost in subsequent theft, murder, violence, and the tragedies incumbent in that culture, i.e., addiction, broken families, and impact on business and commerce.  Add to that the "human trafficking" element, which includes kidnapping and slavery.

Add to this the cost of police and security measures, and the drain upon our nation becomes even more apparent.

When a short survey of invaders were asked if, when they decided to come to the U.S., they considered the impact their coming to the U.S. would have, say on American children, their education, our social institutions, etc., the ones that did not stare blankly back, or give the surveyor a look like he had three heads,  would express that this was a rich country and could not only afford the impact, but would absorb it, and would benefit from it.  In fact they demonstrated a definite feeling of entitlement.   Most had no opinion, others said they faced drastic conditions at home and came here to improve themselves and their families.  None expressed concern for the country they were invading.  In fact in recent times large groups of invaders have openly demonstrated and participated in protests to advocate for "legalization" or amnesty.

The invasion is being made worse by an administration that insists on increasing the numbers of invaders that come across our borders for political benefit and power.

Protesting against this invasion is ridiculed, even by candidates running for President.

Ohio Governor John Kasich said about deportation:  "...for the 11 million people? Come on, folks, ... It’s a silly argument, it’s not an adult argument. It makes no sense...”

Today you  see persecution of conservatives by the White House via its subordinate government agencies.  The Christian religion is under attack.  Constitutionally "guaranteed" rights are under attack.

Government officials, found to be corrupt, taking money in exchange for favors, caught divulging classified information via insecure communications, caught lying to cover up the murder of American citizens, have no fear of being held accountable for their criminal behavior.  The current administration has in place a Justice Department that refuses to act in the interest of the nation and its laws, and yet is willing to act against its own citizens and against its own law enforcement officers to carry out an anti-American agenda.

Those charged with guarding our borders are ordered, not just to stand down and not enforce the laws they are sworn to uphold, but to welcome and serve the invaders.

Let's look at reality.  Today we find ourselves one, maybe two Supreme Court Justice appointments away from a complete take-over by the leftist-Marxist agenda faction.

Precedent has been set enough times to convince the citizenry that it's perfectly legitimate for the Supreme Court, not to arbitrate and to advocate for our Constitution, but to bypass Congress, rendering it practically non-existent, and certainly useless.  The Court now issues law as a matter of course without challenge from the government body charged with acting in that capacity, Congress, its members largely either paid off or blackmailed, or too complacent to care about anything but their own welfare.

With one branch of government effectively rendered useless, and two other branches, bolstered and entrenched by the "fourth estate," the media, and firmly in the hands of Marxists, a political coup is almost done if not yet complete.

The invasion, while it is not being executed with guns and bullets, is nevertheless, and no less, a political and cultural coup d' etat; that is, it is no less a conquest of our nation, under the guise of "self improvement" for the invaders.  Our current government, it appears, is intent on using the political influence and power of the invaders to submit our nation into compliance with a Marxist/socialist agenda.

You, American, are paying out the nose financially, emotionally, and under stress and duress, to finance the invasion and political conquest of your own nation. You are being complicit in your own defeat, and you are expected to shut up and enjoy it.

Can any of this be prevented?

Yes.  And nothing in this article should be construed in any way to mean that violence in any form must be taken against this aggression by anyone.  And yes, something must be done,  and much sooner than later.

Find out about that in Part 2.

I agree the RINOS want illegal immigration... Very sad.  We can solve this issue with border control and we have a moral responsibility to do so.