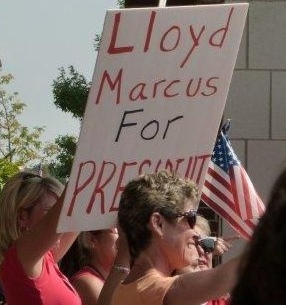 Traverse City, MI will always hold a special place in my heart. Upon leaving the stage after performing at a tea party rally, a white woman in a wheelchair saw me approaching. She yelled, “Oh my gosh, it's Lloyd Marcus! May I have a picture with you?” I leaned over, gave the woman a hug and her daughter snapped a picture.

Donald, our product manager said the woman's daughter told him that her mother is terminally ill. Her mom said all she wanted to do was meet Lloyd Marcus before she died.

Folks, I can not begin to tell you how humbled and moved I was. Learning about the terminally ill white woman's comment came on the heels of the mainstream media and Obama minion's despicable campaign to portray the Tea Party as a bunch of redneck racists.

Barack Hussein Obama is the most racially divisive president in U.S. History. Without reservation, I consider Obama, his Administration and their agenda to be evil.

Traverse City has always been one of our larger rallies. Organizers lead by Candy Gilman do a great job! I pray that my patriot sister in the wheelchair is alive and well. With God's grace, I look forward to giving her another hug at our rally. (Friday, Oct. 5th , 5:45 pm, Outside – Williamsburg Dinner theater, 4240 East M-72, Williamsburg, MI 49690)

The Campaign to Defeat Obama has released a new TV ad titled, “Barack Obama's Legacy of Failure”. Folks, please assist us in making it go viral!