Are you as frustrated as I? You can count on one hand the conservative Republicans who are aggressively fighting Obama and the Democrat's fundamental transformation of America.

Sarah Palin is out there chastising “RINO” Republicans for putting politics over the best interest of We The People. Palin praised Ted Cruz for taking a stand for freedom and liberty. Thank God for sister Sarah, Sen. Cruz and Sen. Lee. But they need help!

Steve Lonegan is cut from the same cloth. Legally blind since childhood, Lonegan has never used his disability as a crutch. As mayor of Bogota, New Jersey, his record of conservative fiscally wise decisions speaks for itself. Lonegan is fearless, outspoken and relentless in his efforts to stop Obama's socialist/progressive agenda.

Think the iron-fist anti-christian, nanny state socialist/progressive agenda is not well on its way of being fully implemented, here are a few examples. 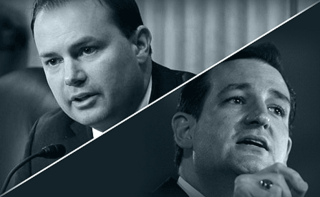 A parent was arrested at a school board meeting for questioning the new liberal curriculum. Can you believe that? What the heck is going on in our country?

California parents are outraged over a ruling by liberals to punish/fine youth football teams that score too many points. The message, a team can be good, but not too good.

A Fox Sports broadcaster was fired for having religious views which are not in sync with the Administration’s socialist/progressive agenda. Such attacks on religion and unapproved opinions are commonplace under Obama.

Dear Lord, I pray a majority of Americans will wake up and smell the tyranny before it is too late.

No Administration in U.S. History has had a record of bullying, intimidation and lawlessness like this one, using every governmental agency to punish and destroy those who oppose Emperor Obama.

After our “moderate” candidate lost the presidential election, the GOP embraced the liberal media, Democrats and consultant's spin that Conservatism and bad mouthing Obama was our downfall. They claim it turned off minorities and low-info voters.

Consequently, Republicans are timid about criticizing Obama and opposing the liberal agenda; Obamacare, raising the debt ceiling, abortion, gay marriage and illegal immigration. Incredibility, Republicans are actively seeking to chase conservatives out of the party.

If we do not send more conservative reinforcements to the front line, America as we know it will be over. Pure and simple. Thus, my passion for sending rock solid conservative Steve Lonegan to DC.

Funding from the people of New Jersey and grassroots has Lonegan surging. His extreme liberal opponent, Booker funded by Hollywood (Oprah, Ben Affleck and more) continues to decline.

EXCITING NEWS! Some polls have the race down to single digits.

Lonegan says the Wednesday, October 16th special election is really a referendum on Obamacare. Lonegan making such a bold statement in the midst of the GOP waving the white flag on numerous issues is truly refreshing. A Lonegan win will be a severely needed shot in the arm to the conservative movement.

Patriots, in the tradition of Palin, Cruz and Lee, Steve Lonegan will not blink. He will fight for us. We need more heroes, NOW! You can help. We have to know what we are fighting first and foremost yet no one seems to know . We can't nitpick on every issue when we don't even have a Constitution as the "Law" of the land .

Mr. Marcus, my friend, you are so right!  You are a hero!  Keep fighting!