When Trump announced his bid for the White House, snooty political elites laughed, “Look at this idiot.” They had no idea that millions of Americans at home watching were saying, “Yeah! Right on! I like this guy!”

Polls continue to tighten between Trump and Hillary. I suspect some of Hillary's lead is due to voters lying to pollsters that they will vote for the first woman president, similar to the Bradley Effect. In 1982, California voters did not want to be thought of as racist so they lied to pollsters saying they would vote for Tom Bradley, the black candidate. Despite a strong lead according to the polls, Bradley lost his bid for governor.

Another thing that may cause voters to lie to pollsters is their fear of being on the wrong side of political correctness. Voters have seen what happens to anyone who speaks out against Leftist's sacred cow issues. Trump has become the king of political incorrectness. Therefore, some voters feel they must keep the fact that they agree with Trump a secret.

I believe the Trumpster will win the White House for three simple reasons. One: His name recognition. Two: His connection with the common man. Three: American's disgust with the direction our country is going.

Admittedly, the following anecdotes are not scientific, but I think they are quite telling.

While in the supermarket checkout line, I saw the cover of the National Enquirer with an unflattering photo of Hillary. The headline read, “Crooked Hillary: Corrupt!” in large bold type. Folks, I do not ever recall a tabloid expressing such an in-your-face rebuke of a Democrat politician. Something new is definitely happening this election cycle. The National Enquirer appeals mostly to low-info-voters. Its cover branding Hillary a corrupt political insider could be huge. The cover also plays perfectly into Trump's narrative that voters have been shafted by professional politicians in both parties. “Vote for me, the outsider.”

I am chairman of the Conservative Campaign Committee. Our team traveled state-to-state during the primaries campaigning for Ted Cruz. I witnessed an unmistakable broad demographic sample of passionate Trump supporters.

Back home in Florida, I experienced that same Trump-mania in Irv, my white handyman. Irv is a low-info voter who worships Obama. Obama gave Irv a free phone. Irv believes Obama is committed to confiscating wealth from selfish evil rich people to take care of poor welfare recipients like his mom and sister. So you can imagine how shocked I was when Irv expressed his excitement about Trump becoming president. Irv said, “Trump is gonna clean this mess up!” This tells me that Trump has a remarkable connection with folks in both parties.

Even the Left's standard tactic of branding everyone who is not liberal a racist has not really worked on Trump. Numerous black and Hispanic groups enthusiastically support Trump.

Trump pretty much owns the evangelical vote. At the GOP convention, Dr. Ben Carson exposed the fact that Hillary's hero is Saul Alinsky who is a huge fan of Lucifer. Liberal media went nuts. They hate it whenever anyone dares to expose the truth about them and their agenda.

Republican turnout during the primaries far exceeded the Democrat turnout. Yes, something unprecedented is fueling the Trump phenomenon.

To keep my blood sugar numbers good, I daily use an aerobic machine at my local gym. The gym has 20 TV sets hanging from the ceiling. Amazingly, Trump is consistently either the topic of discussion or being interviewed on at least five of those TV sets. No politician has ever enjoyed such free coverage.

The FBI and DOJ giving Hillary a pass on blatantly jeopardizing our national security and breaking the law has some “Never Trump” people warming up to him. The same way the GOP and mainstream media allowed Obama to behave as king due to his race, they will allow Hillary to do the same due to her gender. Our nation as founded cannot survive another lawless, out-of-control, corrupt and narcissistic dictator running our country. Hillary our Queen; we her supplicants.

Some have said they cannot morally vote for either presidential candidate. They say, “Voting for the lesser of two evils is still evil.” Fine. God forbid that I judge people for for voting their conscience. However, I submit that sometimes life does call for us to make unpleasant responsible choices; to choose the lesser evil.

Two evil masters seek to purchase the same slave. The slave's owner offers him the privilege to choose between the two evil new masters seeking to purchase him. One master is a tyrant. The other is a tyrant and a rapist, sure to rape the slave's wife and daughter. Doesn't the slave have a moral obligation to his wife and daughter to choose the less evil master? 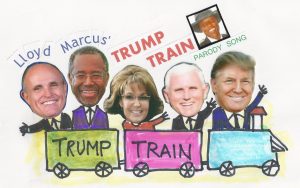 As I stated, my belief that Trump will win is not scientific. It is based on three simple facts. The guy has huge name recognition. He has a unique connection with regular folks. Voters are not up for a third term of Obama channeled through Hillary. In this bizarre-o political season, those three reasons just might be enough to land Trump the Oval Office.

This election looks like it is going to boil down to an insider (bought and paid for) Hillary vs and outsider with a strong record of getting things done Trump.